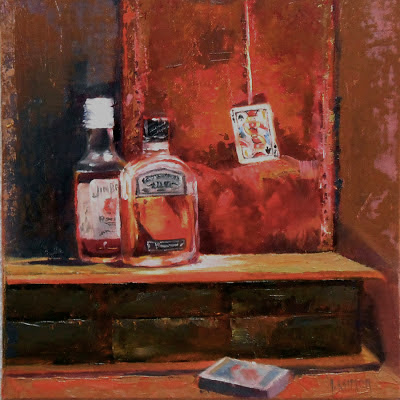 Did we say they had to be consecutive days? And, thank you so much to those who are now following my ramblings!

MY TAKE: My favorite drink is Jack Daniels and 7-Up (Sprite or Ginger Ale won’t do. My son says I’m supposed to drink it with coke, but I’m the Mom so I’m always right – when did he stop believing that?) So during the holidays when our regular stash of Jack was drained, Jerry (hubby) brought home a bottle of Gentleman Jack and said, “I think you’re going to like this even better.” Well I do! I don’t drink many of them because of the empty calories but I do occasionally imbibe when the need arises. Of course only when at home and never when driving!

Today’s historical fact is about hijacking and the first law written to specifically address the issue (although wouldn’t “ya” think it’s pretty much a given that it’s not legal to steal an airplane full of people)! Anyway, this painting is because I’ve been saying, “Hi Jack” more often during this painting challenge and we all know I’m not talking about stealing a plane! The card is just a composition balancer and an exercise in "fussy"!

REALITY: President Kennedy signed into law a bill making aircraft hijacking an act of piracy with penalties up to death.

Congress enacted the measure, which also includes penalties of 20 years to life in prison, in reaction to gunpoint seizures of commercial airlines.

The law also carries penalties of up to five years and a $5,000 fine for giving false information about plan hijackings, and up to a year in jail and $1,000 fine for illegally carrying concealed weapons aboard an aircraft.

Juries are given the sole authority to decree the death penalty for aircraft piracy under the statute, except in cases where the defendant has pleaded guilty or waived a jury trial. In those cases the judge may impose the death sentence.
Posted by A.K.SIMON at 2:21 PM