Muffin from the Moon
#63 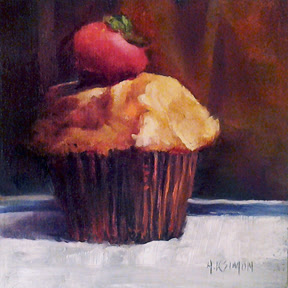 Today was a fun day at the Tuesday Upstairs Painters' Class. Four of us had been in shows over the weekend, Connie returned from vacation and Marilyn returned from her long sabbatical in Florida. But, as a special treat, Mary Spires returned from her workshop with Dreama Tolle Perry and gave us a little demo of what she learned. She said it was an absolute dream (pun intended) spending time in Paris, Kentucky. She feels it has brought her to a turning point in her style choices and would recommend the workshop to any who get a chance to "snag" a spot in one of her classes. Mary's demo was of a muffin she purchased locally so it became the subject matter for the class. Here's my rendition. There was a complicated patterned cloth hanging behind it but I simplified it for sake of clarity of subject.

Hmmmmm - just wondering what the difference is between a cupcake and a muffin? Really!
Does it mean if I switch to cupcakes I won't get "muffin top" when wearing jeans? Just hoping!
Posted by A.K.SIMON at 6:30 AM 1 comment:

Join me, Mary Spires and Judy Hazen at the German Village Art Crawl in Macon Alley tomorrow evening (7/21) from 6 - 10 PM. Music, Drink, Food and Art -  (cover charge of $20 in advance and $25 at the show) What else could be better?! We are at 877 5th St. (come around back to the garage entrance on Macon Alley) Here's a link with specifics (tickets can be purchased online): http://www.gvbusinesscommunity.com/

Here is a preview of a piece I will have there (sorry for the crooked pic): 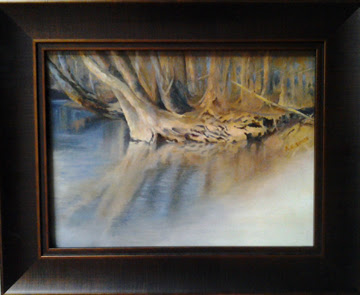 © A.K.SIMON - Hanging on for Dear Life - 9 x 12 oil on panel $250 (framed)
This painting is of a tree that I see when walking my dog along Big Walnut Creek in Canal Winchester, Ohio. The shore has eroded so much over time that I decided to do this as a vignette with the foreground shore totally missing. The season is early, early spring before any leaves but still warm enough to walk. 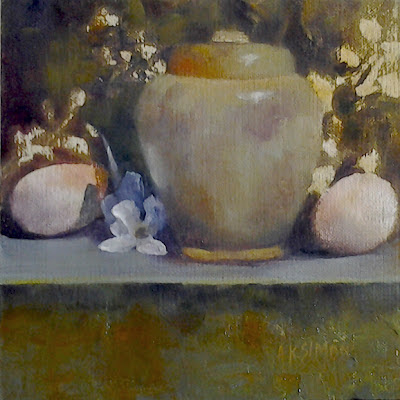 Some ideas for paintings just click from the minute you see the scene. I really liked this set-up by Donna Noice on Tuesday morning - of course it's not the whole scene, just my take on a part. There was this fabric in the background that was "camo-like" and it started the wheels turning about life, death and becoming more jaded the longer we live. Here was the jar, which I don't think really was jade but my mind went there and the eggs a symbol of potential. What do you think? Will they become jaded - probably (sorry that's my jade talking).

I really like this one because the light is just the way I want it and there are also some edges I really like. For the first time in a long time I started with a stark white canvas, went to a tone of gray green immediately though then blocked in the shapes to get the composition I wanted. The setup really would have looked nice on a long horizontal format but I only had squares with me. May revisit this one with a different canvas!
Posted by A.K.SIMON at 7:00 AM No comments: 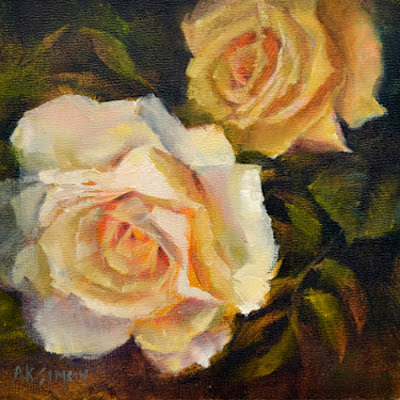 Peace roses are absolutely gorgeous! Their many layers of luminosity have mesmerized me since I was young. We always had peace roses and I remember wondering when I was young what made them open. I also remember taking advantage of the opportunity to study the japanese beetles who devoured the leaves because not too many people used "Grubex" back in those days.

Peaceful indeed - they have a peace that passes understanding and one only need study them to understand the majesty and superiority of nature.

I'm trying out some of the "Dick Blick Artboard Panels" so there is a strong surface texture that runs through the thinner parts of the paintings - not too sure how I feel about that yet. This painting is one of my favorites because the luminosity I sought is there.
Posted by A.K.SIMON at 7:00 AM No comments: 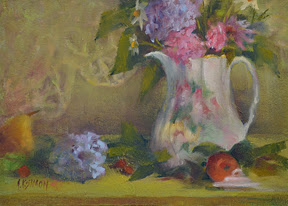 
I just kept thinking of those two little old ladies in "Arsenic and Old Lace" when I was painting this because of the antique pitcher, lace and the traditional setup - that is why this title stuck.


This is a still life set up by Donna Noice with flowers supplied by Laurie Hatler from her daughter's garden. Connie Layne supplied the pitcher which I believe had been her grandmother's. And, to top it off, the masonite panel was given to the class by one of the others students whose husband's business had no use for these small pieces. So, sometimes it takes a village (and 30 years or so of practice) to make a still life painting. : )


I started this one on a pre-primed green panel. I did little editing of the elements on the table so it did take some "squeezing" to complete the piece. It certainly gives a "big feel" to such a small canvas. Overall I think it looks pretty cohesive. I really played down the lace from the setup or it would have demanded all the attention. Done for today - on to tomorrow! 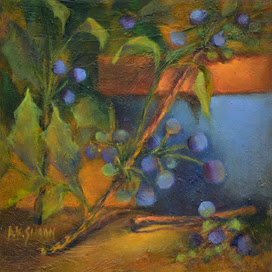 I can not count the number of times I have had people make comments to me about "that strange holly plant with the blue berries rather than red ones" because they are unfamiliar with Oregon's state flower: the Oregon Grape.

While the leaves are somewhat like holly, the blue berries are a give away. I have been told that some people use the berries in some types of jam, but the fact is that this is considered a flower and not a fruit: they are generally not suitable for eating.

Also, unlike holly (which you will find in abundance all over the place in Oregon now) it is not an imported plant: as the name implies, Oregon Grape is an Oregon native.

Around late March and early April, yellow flowers appear on the bushes. These are the blossoms. The "fruit" will come much later. The second photo shows what these flowers look like.

As there are a number of public plantings of our state flower in Portland (and Salem and many other cities as well!), both in public places and private gardens and yards, I have more photos of Oregon Grape in the Oregon Grape tip in my Portland section.

I was trying some things with texture and background with this one and probably won't use them again so I won't share them here. 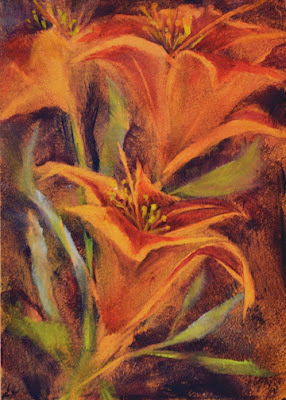 Sometimes I just mess around and pick one flower out of a whole bouquet and try to use the shapes of that one flower to make a "sculpture of a painting". Last Tuesday morning that is what I did with this painting. I wiped it off twice and ended with this piece which I find suits what I had in mind to create. Trying to get essence without too much edge.  It is the time for lilies blooming all around us right now so I'm sure I will explore this further.
Posted by A.K.SIMON at 7:00 AM No comments:

Reflections of us All
#57 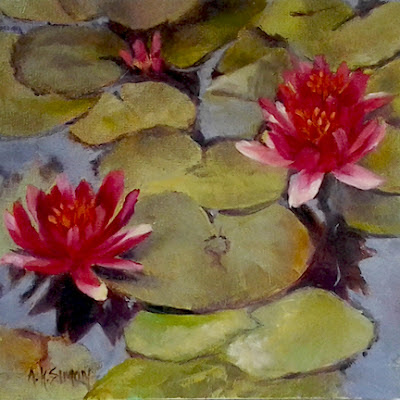 (Just FYI: day-RAY-cho is a widespread, long-lived, straight-line windstorm that is associated with a fast-moving band of severe thunderstorms. Generally, derechos are convection-induced and take on a bow echo form of squall line, forming in an area of divergence in the upper levels of the troposphere, within a region of low-level warm air advection and rich low-level moisture. They travel quickly in the direction of movement of their associated storms, similar to an outflow boundary (gust front), except that the wind is sustained and increases in strength behind the front, generally exceeding hurricane-force. A warm-weather phenomenon, derechos occur mostly in summer, especially during June and July in theNorthern Hemisphere, within areas of moderately strong instability and moderately strong vertical wind shear. They may occur at any time of the year and occur as frequently at night as during the daylight hours.)

Though I may have experienced one in my lifetime I had never heard this word until this week and would like to strike it from my memory. Last friday evening we had a durecho blow through our area with such force that it ripped 100 year-old trees out by the roots. Though not classified a tornado, it blew through at 85 MPH and drove me to the basement without hesitation. Many are still without power as a result and the heat still soars over 100 degrees.

So, "what" you say, "does this painting have to do with a durecho?" Though 100 year-old several ton trees were ripped from the ground some delicate flowers were left unscathed. These waterlilies, though scorching in the hot sun were unaffected by the wind and rain. Many of the trees downed were rigid oaks that don't bend or lean, they remain rigid and are forced to crack, but the willows and honey locust allow the wind to flow through them and many remain intact. So, I guess the moral of the story is to bend and be flexible in life's storms and you may just make it through unscathed (no promises).

BTW our second durecho blew through on Sunday evening and shut the power down again for those who had it restored on Saturday. But many thanks go to those stores who had ice and provided it for free to those in need and to the hundreds of power company workers who have worked in the unbearable heat to get things up and running again!