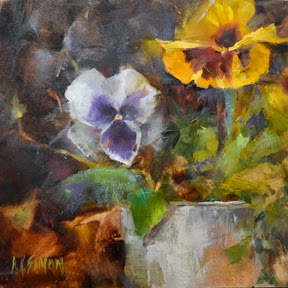 Quote for today: "Pick your battles with everyone, including yourself . . . remind yourself everyday that you have been given another chance at love and cherish that opportunity."                Jessica Warrick
http://www.huffingtonpost.com/2015/02/27/quotes-and-advice-for-blending-a-family_n_6764840.html

This is another small study of flowers - pansies this time because that is what Donna brought to class (along with the rest of the garden complete with statue). Knowing myself and the pace at which I paint, this is my focus from that large, complicated garden set up. There was so much going on in that scene I decided, why not make the painting look like "all that is going on," so the stroke work became chaotic. But with "all that" I still needed to bring some focus and reason for the painting so here they are, two pansies sharing a pot (which almost ended up being named "two pansies sharing pot" but I remembered this is a family show). Strokes were added with regard for time and instinct. Donna noted that I had painted this with a big brush but I didn't realize that until she mentioned it to someone in class. Imagine that, instincts may be kicking in after all these years of painting.
Posted by A.K.SIMON at 10:00 PM 2 comments: