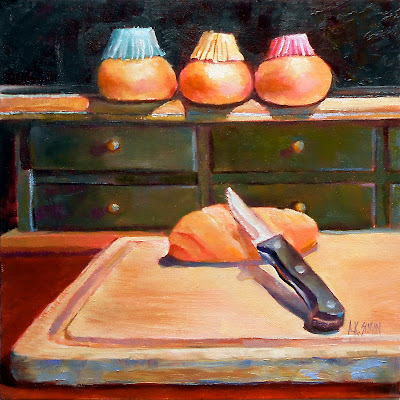 
“Thirty Days Hath September” – 30-day Painting Challenge, Day 4
Historical event: Friday, September 4, 1863: Civil War Bread Riots in Mobile Alabama
It occurred to me as I was racking my brain to portray this historical event that we sometimes put a positive spin on a predominately negative term. We use the word riot sometimes like: “Wow, we had a riot at that party last night.” So, I imagine as we sleep at night, the dinner rolls and bread break out and line dance on the cupboards and cutting board with their little party hats on – the knife of course is the “bad boy.” The bread is literally having a riot! (hey it could happen – happened in Toy Story!)
And for the negative riot . . . (excerpted from historyorb.com) On Friday, September 4, 1863 the women of Mobile, rendered desperate by their sufferings, met in large numbers on the Spring Hill road, with banners on which were printed such devices as "Bread or Blood," on one side, and "Bread and Peace" on the other, and armed with knives and hatchets, and marched down Dauphine-street, breaking open the stores in their progress, and taking for their use such articles of food or clothing as they were in urgent need of. It was, in fact, a most formidable riot by a long-sufferings and desperate population.
Gen. MAURY, commanding at Mobile, ordered the Seventeenth Alabama regiment to put down the disturbance by force of arms. The soldiers refused to obey the order, saying that they would, if they took any action, rather assist those starving wives, mothers, sisters and daughters of men who had been forced to fight the battles of the rebellion. Upon the refusal of the Seventeenth, the Mobile Cadets were called upon. Now, the Cadets are known far and wide as a fancy military company, organized for the purpose of holiday show and parade, which has never yet seen service in any field, and probably never will. But being made of sterner stuff than the Seventeenth, which is probably largely made up of mudsills, the Cadets undertook to force these poor, desperate women to retire peaceably to their homes. Quite a little scrimmage ensued, resulting in the repulse of "the gallant fellows," who have figured in the Mobile papers for so many years as capable of material deeds. The Cadets were defeated and taught to fly in their first action, and the mob ruled the hour. Mayor Slough and the Provost Marshal now appeared, and tried their powers of persuasion. They promised the women that if they would disperse, they should have everything they required. This strategy was more successful than open force, and the rioters went home "promise-crammed."
The riots, however, broke out once again later that day!
Posted by A.K.SIMON at 3:44 PM