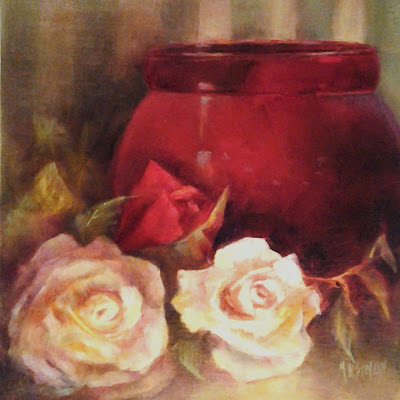 ©A.K.SIMON - Awaiting Final Arrangements - oil on linen - $100
Tis the season for red and green and this vase was "eye popping" red and in true challenge form, Donna placed a red rose right beside that red vase in the class set up. I guess with the striped wallpaper and the roses I got kind of a "funeral home" feel, thus the name of the title. We give ourselves only three hours to paint these so it can be a real challenge to get them done. This one did not make the cut. I had to work on this a little in the studio after class. Funny thing about this one is that it looks very traditional in a gold frame then putting it in a black frame really gives it a contemporary feel.

Just squeeze the neck in and put a stick in it and you have a beautiful cinnamon candied apple!