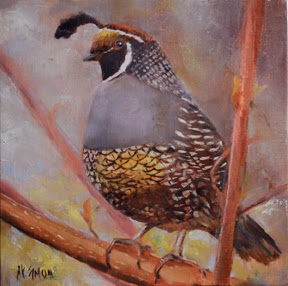 ©A.K.SIMON - California Quail - 8"x8" oil on linen - $100
Today's Quote: Be like the bird who, pausing in her flight awhile on boughs too slight, feels them give way beneath her, and yet sings, knowing she hath wings.

Don't you just love an extravagant hat? This is my favorite state bird! I'm a little behind because of prior commitments but I finished this one today. Since I've never painted birds I'm a little hesitant and find it much harder to be painterly without the confidence of a familiar subject. Oh well, the journey continues.

Next week is a plein air trip so I'm not sure how that is going to fit into the 30 challenge?!

Info about the Quail:

The California quail (Lophortyx californica), also known as the valley quail, became the official state bird in 1931. A widely distributed and prized game bird, it is known for its hardiness and adaptability. Plump, gray-colored and smaller than a pigeon, the California quail sports a downward curving black plume on top of its head and black bib with white stripe under the beak. Flocks number from a few to 60 or more in the fall and winter months, but in the spring break into pairs. They nest in hollows scratched in the ground and concealed by foliage, and their eggs, 6 to 28 in number, are creamy white and thickly spotted with golden brown.
PLATE CCXC.--MALE AND FEMALE.
This beautiful species was discovered in the course of the voyage of LA PEROUSE, and figured in the atlas accompanying the account of that unfortunate expedition, but without any other notice respecting its habits or distribution, than an intimation of its having been found abundant in the plains and thickets of California, where it formed large flocks. MR. TOWNSEND has lately sent me a beautiful specimen of the male, which he procured on the 6th of March, 1837, near Santa Barbara in California. I have to regret, however, that he has not furnished me with any account of its habits. MR. NUTTALL, in speaking to me of this bird, informed me that it is very gentle or confident, so as to be in a great measure regardless of the approach of man, that its manners resemble those of our Common or Virginian Partridge, and that the males in spring are seen perched on low bushes, where they utter their love-notes in the same emphatic manner as the species just mentioned. http://www.50states.com/bird/quail.htm#.VAu9RWSwIug