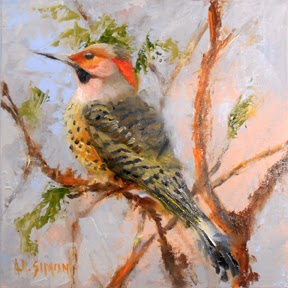 Quote for the Day:  “The reason birds can fly and we can't is simply because they have perfect faith, for to have faith is to have wings.”
― J.M. Barrie, The Little White Bird

The Leslie Saeta September Challenge begins today and since I've been AWOL all summer I decided I need to get busy. I have been painting but not posting very much because I've been finishing some home projects that just couldn't wait anymore. Here's the link to see everyone's work: http://lesliesaeta.blogspot.com/

So here goes! I love birds and my first painting every was a goldfinch so I've decided to paint all of the state birds. When I initially began I thought, "well some will just have to be finished after the challenge." Not so, there are only 29 birds to paint so I come up one short. I'll figure something out by the end I'm sure. I'm just going to do this in alphabetic order by state and post a little info about the bird. I've already researched all the birds and I do have a favorite (sorry to say it's not Ohio where I live - we share ours with 6 other states). I'll let you know when I get there.

Heads up though, I will be on vacation during this time so things may get doubled up or missed - oh well - it will be a plein air trip so maybe i'll post some of that work.

Info about the Yellowhammer Northern Flicker  Info from http://www.statesymbolsusa.org/Alabama/bird_yellowhammer.html:

The "yellowhammer" was designated the official bird symbol of Alabama in 1927 (Alabama is the the only state that chose a woodpecker as state bird). The yellowhammer (correct name northern flicker) has been a symbol of Alabama since the Civil War (Alabama is often called The Yellowhammer State). Northern flickers (Colaptes auratus) range throughout the USA (red- shafted in the west and yellow-shafted flickers in the east, with interbreeding between these two color variations in between).

The northern flicker is a common species present year- round in Alabama, but bird surveys show that flickers are declining in numbers (particularly the eastern yellow-shafted flicker). Possible reasons: use of pesticides on lawns and other feeding areas, and diminishing eastern forests.