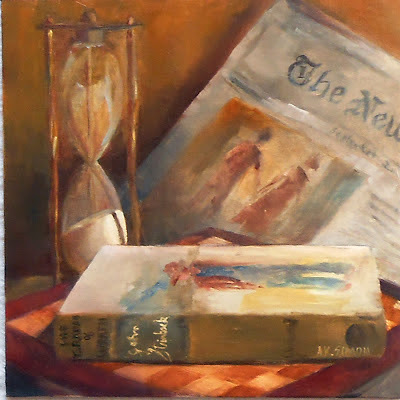 Historical fact: On September 2, 1990 The Grapes of Wrath closed in New York after 188 Performances.

This is painting #2 in the 30 day challenge but we are technically on day #3 - already behind. I work all day on Thursday's doing bookkeeping ☹ so there was no way I could get one done yesterday and also sleep and eat - and we all know we can't skip eating! I will post it as day 3 though and try to catch up later with 2.  It is my day to work in the studio tomorrow so I will have five hours to paint along with taking down the Christmas decorations.

Without a doubt I had to do this bit of trivia. My favorite author is John Steinbeck. I have read every one of his books and will probably revisit a few in the future. I find the work of Ken Follett to be in the same line as Steinbeck. I'm currently reading Pillars of the Earth (old I know but just getting around to it).

I did not have an original book jacket for The Grapes of Wrath so I had to Google it and try to paint it sideways - well parts of it got on there - otherwise I would still be wrestling with the rendition. The date is on the newspaper but I will need to fix it so it is a little more legible. Notice too that the "time has run out".

As an aside, Lois Bromfield (pulitzer prize winner for Early Autumn) is from Ohio and owned Malabar Farms where Humphrey Bogart and Lauren Bacall got married. Mr. Bromfield was instrumental in traveling to Oklahoma during and after the dustbowls to train the farmers in crop rotation. I have visited the farm where there is now an agricultural extension branch of The Ohio State University. The farm is open four tours and is about one hour North of Columbus, OH.
Posted by A.K.SIMON at 6:46 PM